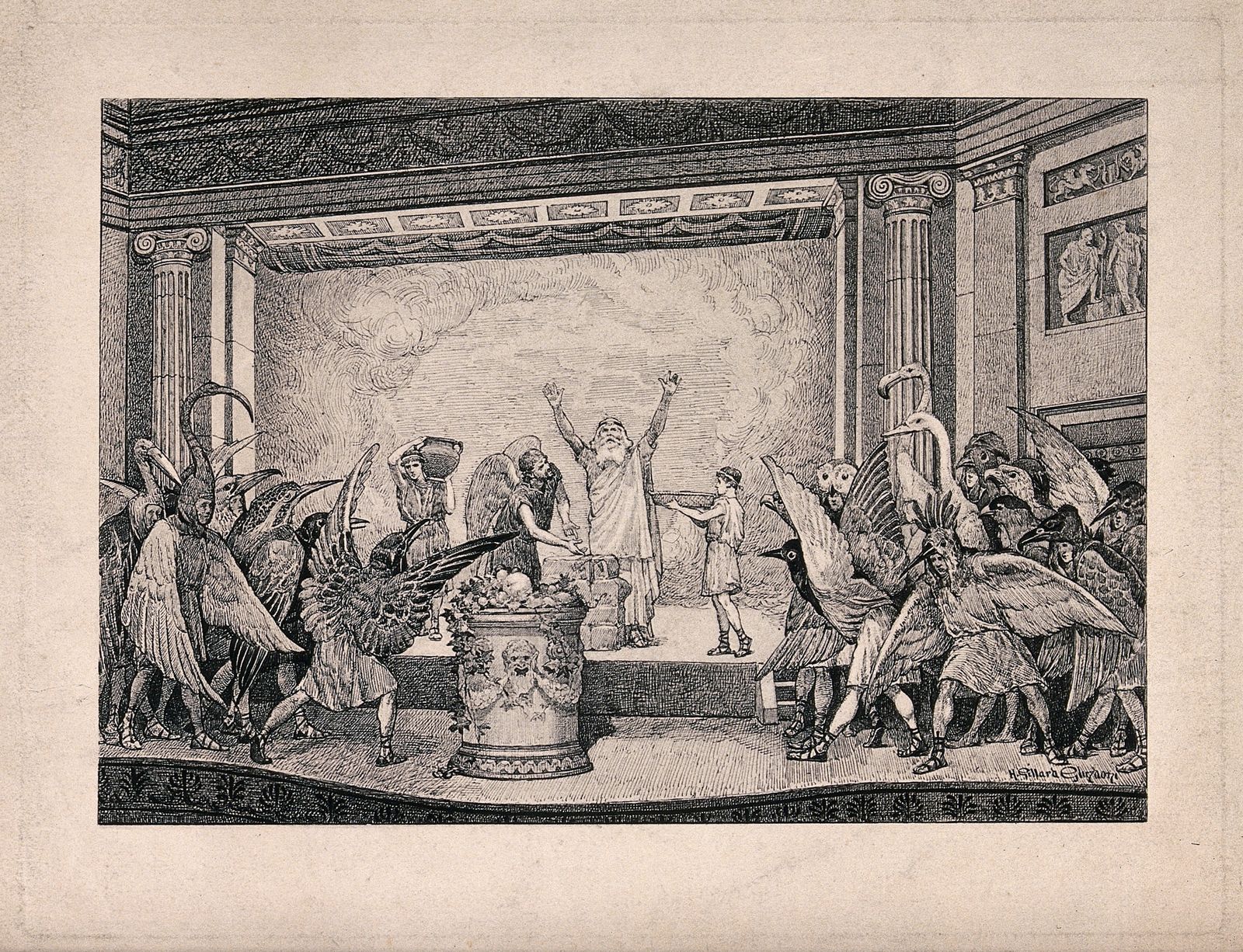 What can we learn from a farce about banishment?
Where do politics, nature and religion collide with the absurd?

If you start wondering about whether if your city is a good place to live, or serve in military for, or risk your life for, Aristophanes says you’re on the road whose end is you become a god.

Pisthetaerus: What are events that stand out on road that Pisthetaerus takes?

This play is commentary in what is inherent in forming a government.

Beginning impulse: Love and friendship (higher level motivations for new city, an anti-city) vs. sex and lust (lower level). Anti-city: Literally building city in the sky. The city may need more than love and friendship, but laws. Create city on passions where there may not natural limit.

Euelpides: He wants city where everyone is strong. And helping people is a privilege. Goodness can just come naturally and doesn’t have to be mandated by city.

Pisthetaerus: Attending wedding = friendship. But it also accords to law (law of love).

Why does this person come to city and birds want to fight him, then they look at him as a god, who eats them?

Politics is ruling and being ruled.

Words have wings... can manipulate birds because of words. Eros has wings. Leave ground and go to boundaries. Euelpides, via words, inspires Eros in the birds.

Lies. They build gradually. Mishandling of words. But that means is that there is a proper handing of words. Winged words looks like it has a dual nature, which is resolved into single nature that’s violated by Pisthetaerus. We can move people with words, poetry, and political speeches to inflame their passions and to lead them off the path of rationality. Logos (speech // laws). Since you cannot analyze and see that you’ve been led off the path, that must mean that there’s an inherent rationale of words and their combinations. Which means that there is an inherent lawfulness to words. Although Pisthetaerus is very good at using words and manipulating people to inflame their passions, it also looks like that when other people come to appeal to them (even petty people, and he punches them on the nose) we see that his way of being in this play is not to see the actual rationality that is available to be seen, even in his speech. There’s a fundamental violation of that because of an overemphasis on the raw passions without their proper combination with rationality.

People // gods with wings: Emphasis on bodily (physical shape) vs. more elevated mind (rationality) which is the deeper way words (Eros) ought to be used.

Words do move us to long for things that may not be present or may just be imaginary.

Pisthetaerus says birds came before gods, so have a legitimate claim. Perhaps this speaks to that in this anti-city — instead of laws but for love and friendship — there ought to be legitimate claim vs. someone just taking it. My own thoughts are with regards to Tyrants.

Takes people who don’t have ambition to overthrow the god, appeals to some notion of justice, and then moves them off their attachment to justice via means of shame, and ultimately moves them via their appetites and they become inflamed

To have a founding city you need a founding myth. You need to create a narrative (Athens, Rome, America). What he is doing with rhetoric he’s employing is creating the founding myth.

Why would birds join a city when they can go wherever they want (is this talking about move from hunter/gatherer to farmer)? Is that some type of commentary on an innate need to join some type of group to feel some kind of belonging even if it doesn’t make sense.

Birds flying around = winded. But they become inflamed when Euelpides talks to them.

Plato’s Republic: As soon as your appetite extends beyond fulfilling your simple, basic needs you’re going to have war. Only way to get more is to take it.

What’s required to have sovereignty over yourself... you become a sovereign of yourself.

He builds wall between people and gods with birds. Siege. So he can make demands. For example, Pisthetaerus marrying sovereignty (Basileia, the personification of sovereignty).

The play ends with Pisthetaerus being successful, while eating birds and the birds don’t mind.

Is there anything in play that suggests this project ought not to work? Could it work? Even with gods playing different role that they’re playing here?

Pisthetaerus is supposed to be a bird at the end (because he ate one). To what extent does it close Pisthetaerus connection to other humans? Could it be that the only limits of his Tyranny is that he changed himself so that his earlier desires have been closed off?

If not, we are stuck in classic tyrannical problem. We are ruled by god who wants to make use of our bodies as he sees fit and is powerful enough to persuade us that it is in our best interest that he do so. Nothing limits what he wants.

This play is a deep critique of certain political systems and how one gets there.

This sense of what looks high-minded dedication to love and friendship, but it turns out that it is not properly married to logos, or rationality, so it has no limit.

Still left with dark question: If it is the case that gods are poor version of Pisthetaerus, and Pisthetaerus is better than that, how are we supposed to think actual political systems or actual Athens that claim not to be tyrannical? Is this a suggestion that they all are?

If Euelpides, is really Socrates (Mr. Good Hope), him leaving half-way through play is terrible critique of Socrates. Maybe he could have done something, but he left.

A Performance of The Play "Birds" by Aristophanes. Etching by Henry Gillard Glindoni. Image from Wellcomecollection.org