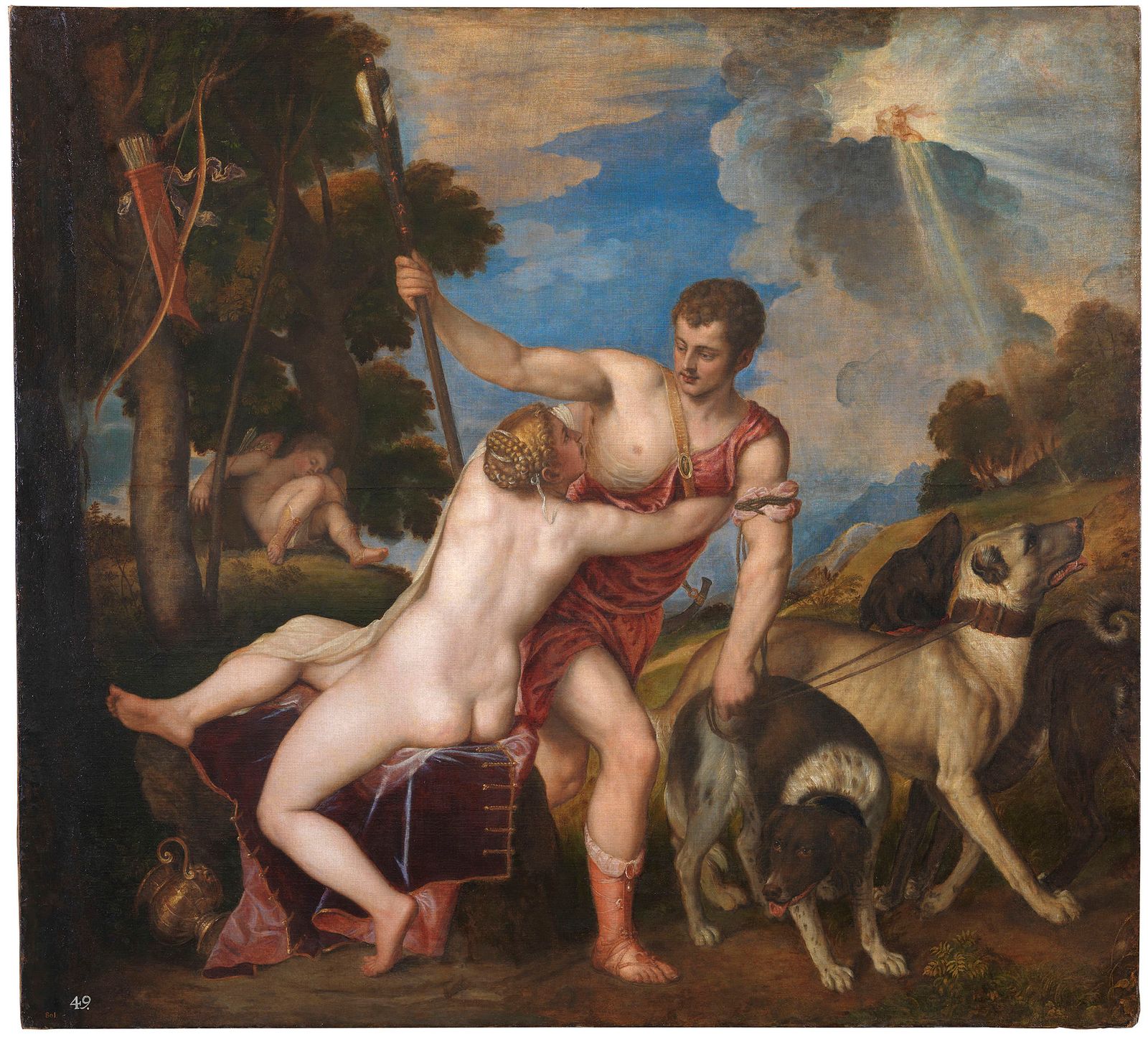 Venus and Adonis by Titian (1554). Venus and Adonis is also a narrative poem by Shakespeare. The poem tells the story of Venus, the goddess of Love; of her unrequited love; and of her attempted seduction of Adonis, an extremely handsome young man, who would rather go hunting.

Perfection vs. wholeness. Superheroes and archetypal heroes. How to balance intimacy and work. Limits of comedy. Free Speech.

The Balance Between Perfection and Intimacy.

Batman: He does not have a magic ring, he does not fly, but he is just a human who represents the pinnacle of what could be accomplished through sheer disappointment. Part of why that works is his parents are dead, he is not married, he does not have kids, and he lives up in Wayne Manor and he is completely undisturbed by everyone and everything so he can hone it. The more you allow people into your life and the more you allow intimacy into your life the more complications that come that sort of detract the previous notion of perfection.

I have a strong perfectionist drive and it suited me well when I was younger. It becomes hard when you have a wife, kids, and dogs but it is not something that you can give up completely. It is trying to find a balance of maintaining the value I will be driving through discipline, and also to exhibit discipline in other areas of your life, and also allow for the complications that come along with intimacy.

Batman and the Joker: They are different sides of the same coin. Both demonstrate the psychopathic intensity of single mindedness.

If intimacy interferes with perfection then why bother with it?

There’s something wrong when only the good things are reflected back to you.

You can take a lowly approach, and people will find it contemptible, and you can come out the other side to get what you want. This is different then going direct. This is the art of indirection.

Batman is an ideal, almost a one dimensional ideal. And an ideal is a judge. When you look at it, it makes you completely aware of what you lack. On one hand, it is something worth striving for and on the other hand, you are insufficient in its presence.

If you erect a hierarchy of values then, by necessity, you exclude people from them. And that is in some sense oppressive and wrong. The issue postmodernists do not address is if there is no hierarchy of values there is nowhere to go and nothing to do. But there is a point there that if you are the exemplar of something you make everyone else feel insufficient in your presence. You imagine that that would be easy for that to take on a bullying aspect.

Sidebar Commentary: I was bullied incessantly as a teenager for — what appears to be the case in hindsight — excelling in wrestling. I chose to ignore it, but it made me pull back into a shell. In a way, it was kind of good such that I didn’t become infatuated with myself, but in another way it was damaging.

Is there a corollary between comic books and moral values?

Comic book characters are, in a sense, in the public trust. There are stuff that you know that you cannot do. For example, you cannot have Batman kill a busload of nuns. You strive to bring something new to this character but you also need to honor the traditions that come before. You have been entrusted with this thing where you have to play with it and navigate the tight rope.

Beauty and the Beast — The archetypical female myth. Five most popular female Beasts: Surgeon, billionaire, pirate, vampire, werewolf. There is a kind of monstrousness in perfection.

Is it that women are attracted to men who are uni-dimensionally monstrous enough to climb to the top of a given dominance hierarchy? That begs the question, in that drive for perfection is there is not something intrinsically monstrous? And that has something to do with sacrificing everything else for that single-minded pursuit.

The border line between vengeance and justice is very murky. There is a requirement of intimacy in buffering against that perfection. In doing it that also provides the necessary buffer against monstrousness. The hard part is not making you a killer, the hard part is making you human.

You want to be everything? I want to be one thing well. It is the antidote to becoming an old child too. That is the Peter Pan story. You have to give up everything to become one thing. But if you do not give it up then you become nothing, eventually. Aging forces you, in some capacity, to not find one thing or to not do all things. At some stage aging takes away perfection from all of us.

The necessity for perfection is the antidote to the Peter Pan story. Even the antidote to the Peter Pan problem has its own problems echoed with intimacy. As you get older, family and friends become even more important to you. As you get older and you get robbed of things, I wonder if it is the intimate relationships that you have that provides solace with regards to being on your own deathbed.

Being great at all things: Luxury, turning back the clock on aging, not making choices.

One of the things that bothers me about the modern world is we act as if we are going to be no older than 35. Our cultures founding story, Christ, who died at the age of 35, has no founding myth with somebody who is older than 35. There is an obsession in Western culture with youthfulness. People act as if they are never going to get old. And one of the dangers there is that you do not establish the kind of relationships that are going to buttress you.

Los Angeles as The Land of the Perpetual Adolescent.

Our culture is built around never giving up and following your dreams.

There is a pervasive notion that you never settle. There are people who never sort of moved on to a job or a skill that is gratifying because they are waiting for another break. And it is heart breaking. Or they had some success for a period and never recaptured it and never reinvented themselves.

Sidebar Commentary: Perhaps this is why craftsmanship and artisanship is such a low-NPS economy in the United States versus some place like Japan, where you can settle and dedicate your life to a craft.

If you are wealthy then your children can be deprived of necessity. This means a necessity of action and in the necessity to make a living. Usually, by the time someone attained wealth they have baked-in the discipline and the love for the field that led to it.

Usually, people who make a lot of money tend to love what they are doing at some level. By the time you get to the point where you do not have to work, you love the work so much that you realize money is not what brings you happiness. Because you cannot take all the shortcuts when you were younger that the trust fund children have taken. The empirical evidence is pretty clear.

Seeking Perfection in a Spouse

If you are in for perfection in your relationship then you have impossible standards. Second, you are impossible to live with. Third, you need someone that triggers that ideal.

Animus possession: You meet someone who meets your ideal of perfection and you are so tongue-tied in their presence that you cannot help but act like a complete deer in headlights, or something equally pathological. You have to give up that demand for immediate perfect. And you have to work towards it in the confines of your own relationship.

The Wild Man and Domesticated Man

You do not want to erode in each other those initial things that caused the attraction. This is something you see a lot in marriages (American thing). You get this domineering, controlling wife and then the husband ends up being like a little boy who gets away with things, trying to get things done.

If you shut down self-awareness then everything shuts down. If you actually want to engage in an endeavor that is interesting, you better reflect and think on yourself, and you better not armor yourself solely with ideology. You better be able to maintain a sort of openness to the world as you are learning. You better not get too arrogant.

In your 30s when you start becoming a better human. You are able to reflect on yourself (because you’ve had enough experience with reality to empirically witness the patterns in life).

The character of people is understanding their everyday tragedies and capturing their everyday triumphs. Within the constraints of the form there is a liberation. In the world today there are very few original plots. These are mostly things we have seen and understood before. There is this idea of doing something great within a form that is recognizable. It is recognizable because it is pleasingly archetypical.

Young women who are symmetrically perfect and represent a Jungian ideal.

Creative freedom is like Peter Pan. People think that without structure and without order you have freedom. Do not have to delay between wanting to try something and trying something. Do not be afraid to fail or embarrass yourself.

The only thing you can control is discipline. If you flap your wings and you are bumping against the ceiling all the time, you wait to encounter luck in the sense that the ceiling opens for you.

Working is like training, building a muscle. Great to be athlete. Value sports for active but don’t tend to talk about values they instill (discipline, long term planning and sacrifice). There is hormetic response. Fully inhabited by something else (like a carpenter). Utterly engaged and fascinated. Endless opportunity, in control, just steer ship.

In writing fiction you can create unlikely set circumstances (contract between you and reader). Then round out characters. Conclusion should feel inevitable and unpredictable.

There is a constant tension between high discipline, high orderliness, high openness. This is why high-level create a performance so rare.