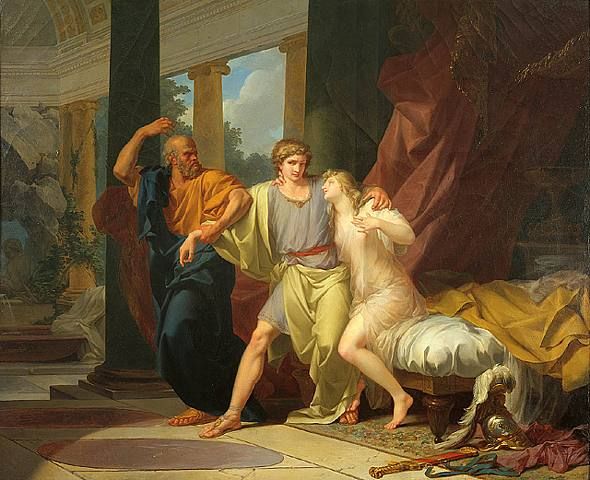 Alcibiades is one of the most famous figures in military history. He was a successful Athenian general who fled to Athens’ enemy Sparta after being charged with sacrilege. He and Socrates had a very "complicated" relationship. This particular dialogue raises questions about the nature of justice and who is worthy to lead.

This dialogue raises questions of justice and who is worthy to lead.

Socrates is teaching Alcibiades justice. Socrates knows that he wants to rule Athens and conquer the world militarily; however, he does not know justice.

What is interesting: Whether the young man had intentions to rule the world or if Socrates brought it out of him. This is a role of mentors pulling out desire inside from someone’s soul and giving them permission to be great.

What is Eros? Is it that he is driven by passion? This word is even on the shield. His shield. This word can also be stated as a yearning for something more. Even with all the lovers that are courting him, because he is so beautiful — and comes from wealth — they are somewhat not good enough for him; yet he tries to get something out of it. These people are trying to impress him but the difference between his yearning and what they are able to offer him is too great.

Socrates shows that there is an insufficiency in his mind or his soul. That he lacks what and how, and his general misunderstanding of justice. Basically, Socrates pulls out of him his desire to rule the world. Socrates tells him that he has a longing, and it is an absence.

They have longings despite what they know. A longing is something in the soul that always propels you to supersede yourself. It is mostly presented as a lack; a yearning for something that you do not have. It is you wanting to have something fulfilling. The sense of moving forward, moving ahead.

Young man needs to gain power politically and or go to war. This is an interesting corollary: "I am pretty good at something’s therefore I should go do this big thing".

This sense of wanting to feel yourself up against the challenge is Eros. A massive blowout vitality. To feel yourself challenged in such a way that things are "on the line". You are facing them and wanting to overcome them. This brings together two notions:

1) That you feel like you’re good at something — for example, I want to join the military to kick-in doors.
2) That you want to feel yourself being in the situation be put above yourself so that you have something to strive towards that is bigger than yourself — to be in more than just the mundane day-to-day life.

He is superior to basically all of our sins. But even when he was showing inferiority to his peers in Persia, he still wants to be superior and to be better than them. He still wants to be the one to be first. This is an example of pushing out word, of longing.

In terms of the military: It may be an instinct that allows this heuristic. "Lead, follow, or get the hell out of the way". If I find myself leading, I lead. I lead until I get up and to the point where someone is better than me. And then I follow. If I cannot do any of those then I should just leave and do something else.

"Will to power" over your fellow man. This is a theme. For example, he is in a chariot and tells the person in his way to move. This is asserting his alpha male.

Sidebar Commentary: We have previously believed that humanity is about conflict and collaboration. This is true. But it is missing the element of the individual. And yes, I would like to add mastery. These are all pursuits. They are never-ending "states". And "states" do not define humanity in that pursuit. Humanity is a struggle of conflict, collaboration, and mastery. It is a struggle because we are meant to struggle.

A natural way to express your alpha inclinations is through command.

Socrates says in order to start learning about command you need to learn about justice.

A dangerous conclusion to draw: If you cannot lead or are incapable of leading then you must follow. It is the young man’s capacity for leading that makes him want to learn from Socrates. Perhaps this fits the notion that leaders must also follow. It looks like the instinct for command and the instinct for obedience (or reverence) might be closely related. Perhaps Eros might be the thing that brings these two together because you’re constantly reaching out for that "thing".

In the end, the young man can’t quite get away from the city which is what Socrates was scared what happened. So perhaps he does not for fill what Socrates thought he could fill.

Can we make the conclusion that with the young man needs his knowledge?

The real definition of instrumental: How am I my going to use this thing to accomplish this task?

Knowledge of the soul is what somebody who wants to lead (rule) needs. What you don’t know what you’re doing in some deep way it is and could be troubling. Especially for someone that is always reaching beyond. For example in the sense of Eros.

Learning facts and history is important. But what Socrates says is "You don’t know what justice is". Even if you are excellent in these other ways you are still inadequate. He doesn’t say "no that’s fine" Alcibiades says "I will follow you."

There’s a technical aspect of command. There’s an excellence that Alcibiades thinks he has (to command) but does he have technical understanding?

Interesting: Military leader at 24. In one hand, you must say "ok this is what we’re doing." On the other hand, you’re like "I have no idea what I’m doing". Same with startup founders. You need both: The Alcibiades and the Socratic (understanding why this is).

We need knowledge of having to use power (technical). To use power, need persuasive to move people. Because powers are limited we won’t succeed sometimes. The meaning of success and failure is a problem. Just because you succeeded doesn’t mean everything you did was wrong. Just because you failed does not mean everything you did was wrong. Being able to ground meaning of both in situations where there is a little of each is what the Socratic grounding is offering.

Needs to be piece of hardware (examination of justice, and universal human existance).

Socrates Tears Alcibiades from the Embrace of Sensual Pleasure by Jean-Baptiste Régnault (1785). Image from Wikipedia.org