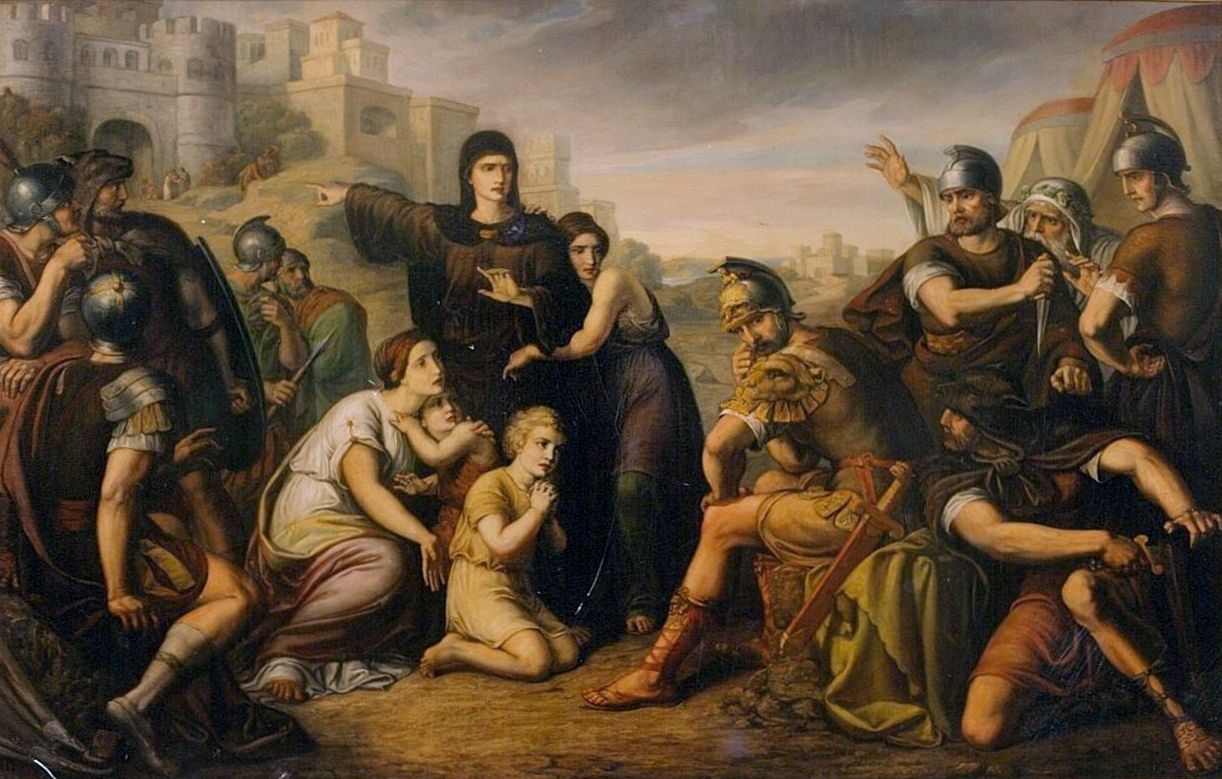 The story of Coriolanus, a Roman general, starts with a heroic victory for Rome, but ends with exile, defection to the enemy, and ultimately death. In this tragedy, how do military leaders relate to the civilians they protect?

Plebes cause uprising against Senate.

Parallels between culture today: Coriolanus associates military virtue with saying what he thinks — reasonable connection to make because if you are a liar then you are a coward. The only reason you lie is because you are afraid of the consequences. So, if you are courageous it is because you are not afraid of the consequences, then of course you will tell the truth. (Signaling today is driven by praise culture without having anything to lose — we get stickers for good behavior and doing what the Mother wants).

Mom says: In war you lie all the time. Perfectly okay to say you will not attack city then attack it. "What is your problem Coriolanus? Deception is part of war. Deceive the people just like you will deceive the enemy." Powerful argument against Coriolanus understanding between truth telling and military virtue.

Coriolanus refuses General's treasure from Volshi saying he wanted his sword to do all the talking. "I thank you General but cannot make my heart consent to take. A bribe to pay my sword: I do refuse it; and stand upon my common part with those that beheld the doing. Troops begin to chant. Coriolanus says "May these same instruments which you profain never sound more." Means shut up troops — I don’t want bribes and I don’t want cheers. He doesn’t want respect from Plebes, the common people. What does he want? What is his ideal?

He does not like lying, simply. In particular he does not like lying involved in flattery — he does not want to debase himself. He does not want to show his wounds to the people — although of course that is how to manipulate the many — he finds that repulsive. And that disinclination to flatter seems to be connected to another important attibute which is a sense of shame. He has a sense that some things ought not to be shown; they’re precious. His wife represents that. Which makes him look more interesting than we other might think initially. He’s a lion — a fierce, incredible fighter, but there’s a necessary rigidity to being that person but it does not mean he does not has a sensitive other side. He might be the most sensitive person in the play (with his wife).

The rigidity cracks with embassy of women at the end.

Connection between sensitivity and rigidity. To tell a lie is admission of cowardice, and he looks at himself as courageous.

To allow yourself to be praised even if the praise is true — or to allow yourself to be rewarded for your excellence in military virtue // war fighting capability — is to open the door to the charge that you are doing it for those things. Sensitivity and rigidity go hand in hand because absolutely unwilling to open the door to the possibility that these are mercenary virtues. Praise from his Generals and soldiers implies that he needs something from them. He does not want the praise because if he accepts them then it implies he did it for those reasons.

He is not a mercenary virtue. He does not work for the highest bitter. But this is the tragedy that he went and fought for his enemy.

The further he is removed from the many, the more they take to him. Or the more he confirms his own excellence.

People are changeable. They are fickle. Why are they fickle? They go the way the wind blows — they are subject to external causes. If Coriolanus wants to be constant, one of the best way to do that is to be entirely self-determining. In other words, not to be open at all. The people are fickle. Coriolanus claims that unless there is war he is superfluous. In a way, he is subject to outside causes because he understands himself as a fighter — if he’s not fighting he does not not know what to do with himself.

You get trained for something and if the activity is not ongoing then it can be a struggle to know how you might fit into the people who you’ve been trained to protect — and therefore to think of in some way as not your equals, at least as a warrior.

Coriolanus is effective with mob disbursal but not talking, which probably makes things worse.

Coriolanus seems particularly well-suited for love and for war, and the middle range is not so present. * Hector: "Why are we doing this... I have to do it but I'd just like to hang out with my wife and kid and not to do it." * Achilles: "This is what I was born for, what I was groomed for."

Hector: This is not in my nature; I was trained to be the warrior that I am. Honor is very important to him. "This is who I am, if I don’t go out and fight at Troy, people will look at me and say I am a coward and I’ll be destroyed."

Coriolanus calls his wife his "silence". Wife's name incorporates name Virgil (Vergilia, but also aka Volumnia). Coriolanus wife is about the private life. Coriolanus’ mother (Veturia) is about honor and shame. Mother gets on her knees and begs for him to think of honor, but perhaps it is not honor that moves him but his mother on her knees (private life). Moved by his wife but it is his mother that sways him to make decision. But is it the speech or the sentiment? Everyone on knees (comedy for gods and tragedy for us). Does he realize military virtue is for sake of something else?

"Mother, mother. What have you done?" Behind the talk of honor is that fact that this is your mom, and she’s begging you... and that ought not to happen.

On civil side: Home and hearth and mother and child. If I destroy Rome then I potentially destroy this family.
On military side: ???

Gods laugh because they do not take being someone’s child seriously or do not take having children serious either. Look at human ties as messing everything up.

Words are necessary to make the body politic pull together and work together as one. There is some doubt about the power of words Menenius has at his disposal.