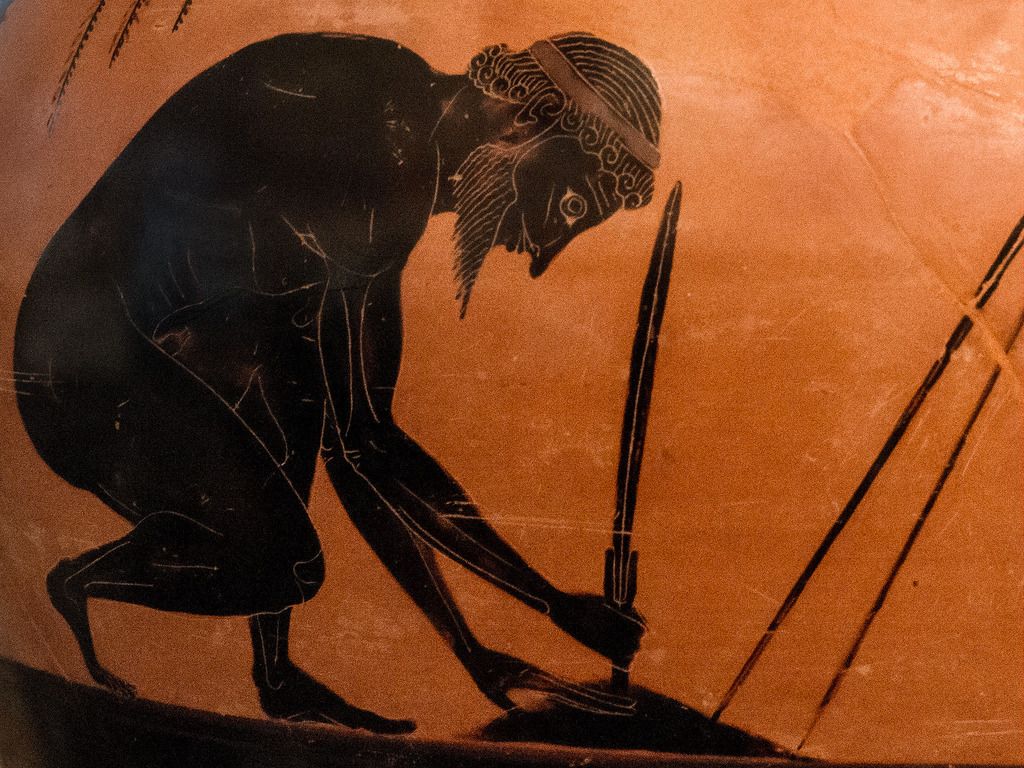 Sophocles’s Ajax is the story of a great Greek warrior who takes his own life on the beach of Troy.

Story of a great Greek warrior who takes his own life on the beach of Troy.

What is impiety? Ajax doesn’t need help of gods. Is that related?

Ajax is near the flank of the coalition camp. This prior idea // relationship // thoughtfulness for Hector. Want be closer to the enemy than his own coalition. In the military, there is this idea of "going native". When you spend so much time overseas you lose touch with your "culture". There’s a certain rebelliousness in subsuming yourself to that culture when you feel almost closer to a different one. That is some port of Ajax’s conscious or subconscious. He is more comfortable with the enemy, fighting the enemy then he is with his own people.

Ajax is closer // thinking about all other things except his wife.

Friends can turn out to be enemies and vice versa. When Ajax comes back to civilian life, he realizes he wants recognition for sacrifices he made and feats he did (true of military).

Odysseus (sheep), Agomenonon (Ox). He isn’t as independent as he thought he was. he is not in charge of world in the way he thought he was when he was fighting the war. It rocks his world when he realizes he is not as in charge of things as he was before. Things shift in life and maybe Ajax’s understanding of heroism depends on things being more predictable and more stable. If you have that firm and devoted belief (linearity: comfort and devoted belief that these are my enemies and must destroy and these are my comrades) and that gets muddied, that is going to shake who you are and what you believe.

Ajax extricates and alienates himself from his comrades. What is the next step when you have revoked your membership in that very linear way of thinking (friends v comrades)? What are necessary next steps when you have no one? We see that in Ajax long speech (440).

Ajax was fine being alone when he was being honored for his abilities, but now he is alone and abandoned by everyone (Odysseus has Achilles gear, not him).

Ajax could have moved allegiance to his family. Ajax’s brother, Teucer, explains how Ajax have saved their lives on a number of occasions. Should have been thinking "oh, this is my friend".

Agamemnon and Menelaus do not have the sophistication of either owning it or taking a stand for the principle the way Ajax does. Don’t want to live in a world where those things are contingent. They mindlessly try to occupy a middle position without trying to own it. Without even trying to say I am a man who knows who my friends and enemies are.

Ajax is not good at navigating at night. He is more of daytime fighter. It is a manifestation of his character. When things are vague and dark, when the enemy is not clear he will not be able to demonstrate his excellence; however, with Odysseus we have the opposite. Tells what type of character and soldier they are.

Odysseus hasn’t revealed himself. Goes back to homeland. He is disguised. And he is trying to test what the people are like that he encounters. He comes home to a bunch of men courting his wife. And he’s dressed as a beggar and he hasn’t revealed himself. His constant refrain to them "I too was a king once and but now I’m a beggar and you ought to know that it can happen to you and therefore you should be treating me well when I ask you for food and shelter." And they won’t do that.

Odysseus concludes that because they are unable to recognize that life is contingent, they somehow cannot be civilized and cannot be incorporated back into society. Do we want to say this with Ajax?

The gift of Hector somehow killed Ajax. Agreed to no crafty behavior. Conducted in daylight. Cut short by night. Sword gifted to Ajax. Ajax eventually put into Trojan earth and uses to kill himself. Recognition of kinship // friendship metaphorically kills Ajax. Peace time vs war time. Having more in common with enemies is lethal.

Odysseus is like a surfer dealing with waves. Learns how to adapt to environment. Ajax is like "No, I am powerful enough and I’ll just march through those waves."

Note: Perhaps this is why Ajax is a daytime fighter and cannot fight at night; and why he chooses to fight Hector in dual with direction action only (cheng), and no indirect (chi).

In the Iliad, Agamemnon is bad leader and Odysseus constantly needs to fix situations.

Odysseus: We cannot be sure of our own future and fates, or circumstances could change rapidly and dramatically. So, why should we mock Ajax? This is theme in Odyssey.

The lesson: If somebody of the gods (Ajax) can be deprived of mind, then we all can end up this way.

Suicide of Ajax Vase by Exekias. Image from Wikipedia.org.