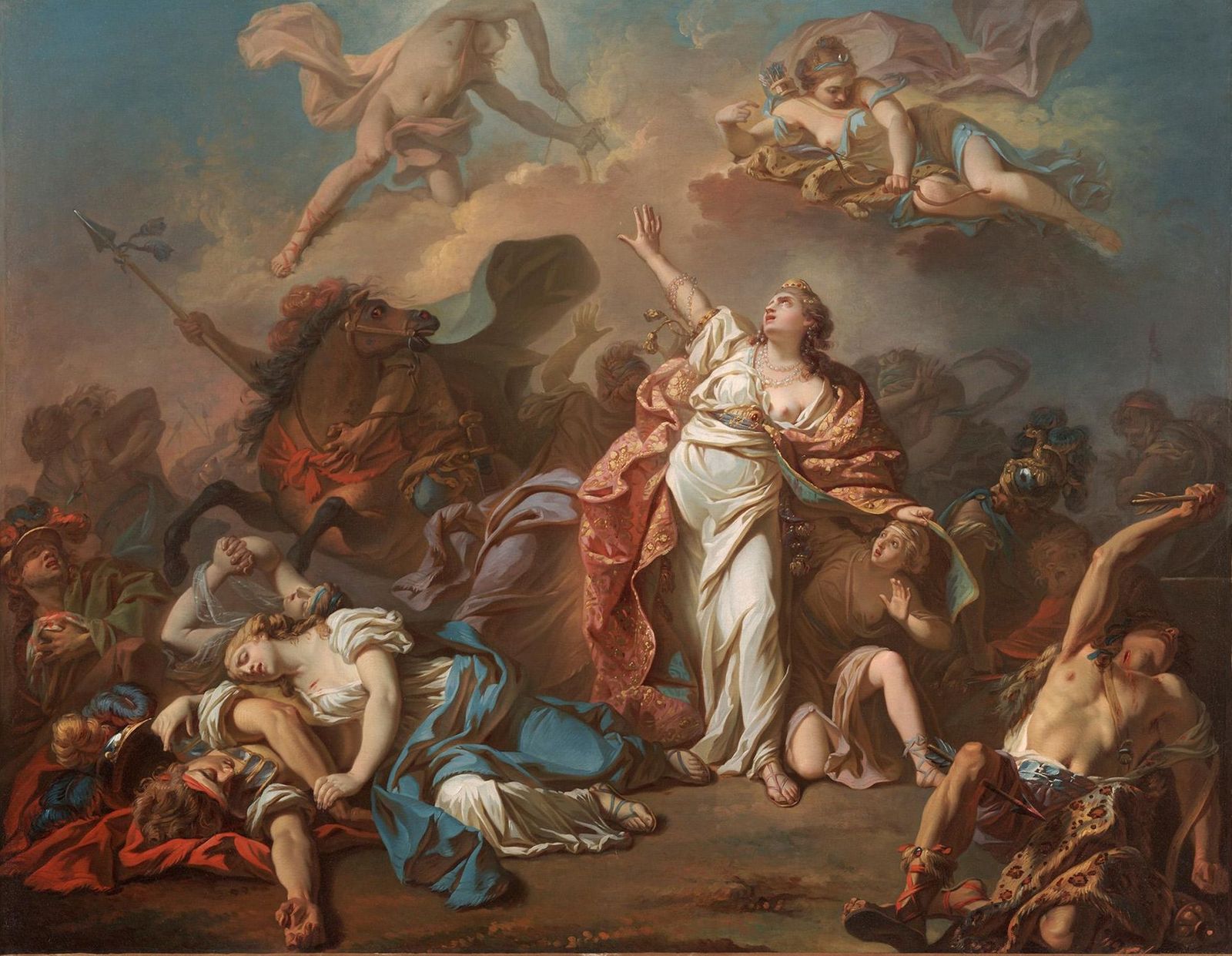 Apollo and Diana Attacking the Children of Niobe by Jacques-Louis David (1772). Niobe, the queen of Thebes, shelters her youngest daughter from Apollo and Diana‘s arrows. The queen’s thirteen other children lie wounded or dead in the painting’s foreground. This violent scene, drawn from a 1st-century Roman poem, Ovid’s Metamorphoses, illustrates Niobe’s punishment for boasting of her own power and fertility and for refusing to pay homage to the mother of her attackers.

What is the the nature of evil?

How do we distinguish it from tragedy?

How might we effectively deal with both the former and latter?

The Finite and the Infinite

People go into academia in order to shield themselves from the absolute reality of nature.

You cannot talk about evil without distinguishing it from tragedy.

The consequences of the finite in the infinite is the existential consequences of life. Without limitation there is no being. When you play a game with someone, you tell them you are going playing a game. Then you say, "Ok, you move first". They do not know what to do when the limiting parameters have not been defined. So, they are stunned by their infinite freedom into a state of immobility. In the absence of a serious constraint there can be no choice, no freedom, and no existence.

Sidebar Commentary: All the possible ways to contend with an adversary are broken into disciplines called The Martial Arts. Further, all possible ways in which you can contend with others in a Martial Art are further broken down into aims. From those aims, we are able to build a scaffolding of technique that helps us accomplish those aims. Each scaffolding is a school towards achieving those aims. Schools compete amongst each other for the right Way to obtain those aims.

Evil is lack of necessity and volunteerism. Economic inequality is not from evil.

Using the story of Adam and Eve as a motif for telling the coming of self-consciousness to humankind.

Sidebar Commentary: The snake brings an apple to them, and then that creates consciousness. It could be that, evolutionarily, we have evolved great eyesight to see predatory beings, particularly a snake. We also can precisely see the colors of fruit when they are ripe.

The Predator is not evil. It could be tragic for the rabbit. With conscious, there is an emergence of moral sense to reflect on mechanism of action and to choose which one to implement in the future.

When realized with self-conscious, Adam and Eve closed themselves off from everyone else (e.g., culture) to protect themselves. Here lies a dichotomy of the human experience: With self consciousness, God tells Adam to work and Adam loses his immediate motivations for the purposes of future security. There is a real cost and tradeoff. Adam is separated from the pure and unadulterated flow of animal life (e.g., the "natives" of Northern America). As a result, people end up suffering from that absence of continual flow, continually. The advantage they gain from it; however, is that humans can plan for the future and not have to be in a constant state of short-term decision-making. The disadvantages is that they can become calculated, cold, and separated from their instinctual resources.

In these stories, Eve is cursed with terrible pain in childbirth. The pain is related to the incredible size of the human skull (brain) during childbirth and the infant's incredibly lengthy period of dependence.

After Adam and Eve become self-conscious, they hide. God is used to walking with Adam and continual flow of information. Why would people hide from God once they realize they are naked? Once you know you are vulnerable, you hide. Do you really have enough courage to manifest any sort of semblance of a Devine Destiny? No. Why do people hide? People hide from their deepest destiny.

The Original Sin: The first time a man blames a woman for his self-conscious misery is the first real fall and not the rise of self-consciousness itself.

God says, "You know that you are vulnerable." From here-on-out, this is when history starts for you. You are now out of Paradise. You are out of the unconscious identification with the natural world. You are going to work. You are going to sweat a lot of the time. Women are going to become beholden to their husbands because the developmental component of a human being (e.g., child-rearing) is so extreme and long. You are going to be cursed to rely on men for protection.

Cain and Abel: They characterize the canonical patterns of reaction to the terrible vulnerabilities that is revealed as a consequence to the development of self consciousness.

Sacrifices are a human universal.

We make sacrifices to God. Why do people make sacrifices to God? To please God. People give up all sorts of things to pursue a course of action that they believe will best ensure their harmonious relationship with the nature of reality (e.g., Libations). We can say this now because we are psychologically sophisticated, linguistically sophisticated, and we know something about human nature because we have experienced it. Thousands of years ago, before people have this level of modern acumen, the best they could do is act out stories about human psychology because they have not developed any further than that.

Sidebar Commentary: Perhaps telling stories is better than explaining why something is something. When reading and then describing the Ancient Classics and Ancient Texts, you need to do it for its literal meeting but for its implied, metaphorical meeting. Metaphors are how you tell stories. There is nothing Newtonian about it!

Abel. Abel believes in the nature of experience — in the nature of existence — so when he is called upon to make a sacrifice, he sacrifices the best that he has to offer… and that makes God happy. As a consequence, everything that Abel touches turns to gold.

Cain. Cain has reacted to his self-consciousness by withdrawing from the infinite and there is a tremendous danger in that because he relies purely on his own devious devices to sail his ship through the shoals of life. As his arrogance grows — because he cannot withstand his own vulnerability — he is able to deceive the structure of reality. Kane offers second-rate sacrifices to God, who can see absolutely everything, and wishes to prevail nonetheless. Needless to say, this does not work.

People will reveal to you their poor decisions in life, the opportunities they did not take, the chances that they did not have enough courage to grasp, and the sacrifices they failed to make. There is nothing mysterious about it. Their own experiences teaches them — hopefully — that their pathology is their own relationship with the nature of reality.

Cain is dreadfully unhappy. He is unhappy because everything he wants does not happen to him. And that is in part because he does not really want it, because if he really wanted it then he would make the right sacrifices to obtain it. The salt — his bitter reality — is rubbed into his wounds by the existence of his brother. God says to Cain that sin is a predatory cat who crouches at your doorway and leaps on you at will, but if you only wanted to then you can master it. This is the absolute last thing Cain wants to hear from God. Because if things are going absolutely bad for you — and they are only getting worse and you are playing a causal role in it — there is nothing more horrible that someone can do to you than reveal to you in a way that you cannot deny that you are entirely complicit in your own demise. And that is exactly what God does to Cain.

This reveals two essential patterns of reaction to the self-conscious vulnerable conditions of existence:

What does it mean to be marked by God and to be told to leave us alone? Murder sparks revenge and revenge destroys societies. God puts an end to it right there in the Cain and Abel story.

Interesting: If you say something bad about Cain’s children, kill 7. If next generation, then 49, and so on.

The motivation that drives the commission of the worst human atrocious is an inevitable social consequence of the refusal of the self-conscious individual to make the sacrifices appropriate to establishing a harmonious life, and their consequent degeneration into a kind of murderous and resentment-filled rage, propagating endlessly through its variations in society until everything comes to an end. After this comes the flood and the flood is not surprising. Because if things go from bad to worse long enough everything falls.

A single person who stops lying can bring down a tyranny (e.g, Nelson Mandela, Gulag Archipelago).

Beyond Good and Evil

Sidebar Commentary: Perhaps you need to be a wild man before you can be a man (e.g., Iron John), you cannot be a man first without having experienced wild man.

If you were in Nazi Germany there would be an overwhelming probability that you would be a Nazi.

The way out of the conundrum, posed to you by your reliance on ideological beliefs and your vulnerability in the face of the unknown, is the development of a truly integrated and powerful character – and that is an individual development… that means constant confrontation with things you do not understand and constant attempts to ensure that your character is composed of truth and solidity rather than deceit. And to make of you self something that is predicated on a rock and not sand."

The way out of the conundrum posed to you by your reliance on ideological beliefs and your vulnerability in the face of the unknown is the development of a truly integrated and powerful character and that is an individual development, and it means constant confrontation with things you do not understand and constant attempts to ensure that your character is composed of truth and solidity rather than deceit and to make of yourself something that’s built on a rock and not predicated on sand.

We are too technologically advanced to be evil. We will do ourselves in.

We are all a center of the world. Each moral decision we make can make us closer or further away.